Placement of accents versus ties

Recently received a great suggestion to reverse current placement of tie start and end points versus accents, i.e. so accents sit above the start of ties. been thinking this through and am sharing my thoughts here on how that could be implemented. Looking for feedback / comments before I start spending a bunch of time coding it up. 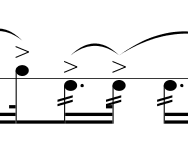 Revisiting the initial thinking which placed them this way round, the snippet below is the problem I was trying to address, resulting in what originally seemed to be a good compromise in terms of clarity and cleanliness of the score.

If we put the ties closer to the head how will this work? Note the last left hand flam at the end of the 2nd triplet. The tie would cut through the flam grace note.

I can see how this next popular phrase would be tidier though:

Maybe the right design is to have the option to mark a “low" start for tie on a note, with the default remaining a “high” start point. Will have to tweak where the tie starts relative to the note head too, today a tie starts and finishes above the middle of a note head, it may be cleaner to have the tie start toward the end of the opening note and toward the start of the closing note.

Another option might be for Drum Score to automatically work things out, saving the author having to think about it thus increasing productivity. Maybe we place the tie end higher if it needs to, i.e. if there’s a flam grace note. That would be a big (maybe welcome?) change in appearance for existing scores though, as we’d be effectively changing the default to a low start.

One approach could be to introduce a global option for the score to place tie ends below accents. Then have the option to manually raise them to a high end point if need be, or once again, automatically do it, in the case of the flam. Think I prefer something more automated.

So my proposed approach to try is:


At a later date, as nobody has actually asked for it yet but I've see it in a number of scores over the years, is to have an option where irregular group ties are placed underneath the note group, ie. triplets etc appearing below the group of notes with a horizontal line bracketing the grouped notes. e.g. —3 — appearing below the notes.